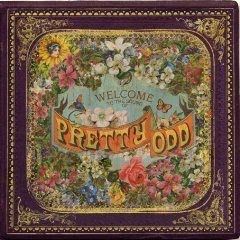 Panic at the Disco - Pretty. Odd.
2008, Fueled By Ramen
1. We're So Starving
2. Nine in the Afternoon
3. She's a Handsome Woman
4. Do You Know What I'm Seeing?
5. That Green Gentleman (Things Have Changed)
6. I Have Friends In Holy Spaces
7. Northern Downpour
8. When the Day Met the Night
9. Pas De Chavel
10. The Piano Knows Something I Don't Know
11. Behind the Sea
12. Folkin' Around
13. She Had the World
14. From a Mountain in the Middle of Cabins
15. Mad as Rabbits
Um... Okay... so I guess they want to be the Beatles. They want to be the Beatles really, really bad. Eh... I'm game. I was actually pretty interested in this one because Panic decided to emulate 60's British pop. The results are a mixed bag. The album isn't bad but it's not nearly as catchy or infectious as the last. I like "Nine in the Afternoon" and "That Green Gentlemen" and I especially like "Pas De Chavel" and the slight country vibe of "Folkin' Around." "Behind the Sea" probably is the most Beatles-esque tune and reminds me of "Yellow Submarine" a bit. I'm glad they tried something new, but this is one time where I think they should have just stayed bratty, pretentious emo kids.
Useless Fact: I've heard that the band wanted to do some epic concept album about faeries or some crap before they decided to ditch that idea and do this.
Posted by The Old Man at 11:00 AM