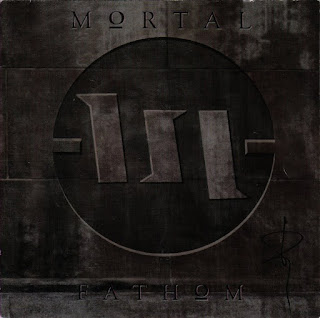 Mortal - Fathom
1993, Intense
1. Alive and Awake
2. Neplusultra
3. Rift
4. Jil Sent Me
5. Ex-Nihilo
6. Above and Beyond
7. (silence)
8. Rainlight
9. Bright Wings
10. XiX
11. Promulgate
12. Electrify
13. Godspeed
Just about everything about the band has improved on this disc. The vocals are cleaner and the guitars are heavier and more prominent. However, I find myself not like this one as much despite the fact that just about everyone agrees that this is their best album. I like the haunting "Rift" and the gentle ballad, "Jil Sent Me." Also... "Bright Wings" which is based off the poem "God's Grandeur" is probably my favorite track. The rest of the songs? Eh... they're alright. I do like Mark Solomon's (The Crucified) guest appearance on "Neplusultra." I don't know whether I was just going through a rough patch in my life when I got this or what, but it just doesn't really capture me like the debut did. Oh well...
Useless Fact: Track 7 is silence and is actually found at the end of track 13 as a rap "thank you" song. It's kind of stupid. I laugh when they try to make the phrase "Alive and Awake" sound cool. It's just them going, "Yeah.... The Crucified is Alive and Awake. Deliverance is alive and awake" and so on. It just sounds hilarious because they sound so serious!
Posted by The Old Man at 8:28 AM