Wish For Eden - "Pet the Fish" 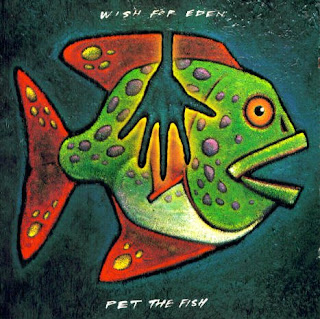 Wish For Eden - Pet the Fish
1993, Tooth and Nail
1. Questions
2. Oceans
3. Don't Know
4. U Could
5. Green
6. Fly
7. Me
8. Fade
9. Blood
10. Pet the Fish
Hmmm.... I think sometimes my "awesome oldies" aren't nearly as awesome as they were fifteen years ago. I got this when it first came out and loved it. It was supposed to be grunge and Tooth and Nail was a brand new label supposed to be putting out cutting edge music. This really isn't grunge though - a lot of people say it sounds like Helmet. I'll tell you what I think it sounds like - the same riff over and over. Seriously, I could sing the lyrics to "Questions" right over "Green." There are a couple of decent songs like "Fly" and "Blood," but for the most part it's very repetitive. I'm not sure why this band is considered by some as groundbreaking, cuz they ain't.
Useless Fact: This was the one and only album Wish For Eden ever put out. This was also the first album out on Tooth and Nail records. Rob Walker came out with a solo album a couple years later, but that wasn't very good either.
Posted by The Old Man at 6:53 PM