The Lead - "Hardcore For Jesus" 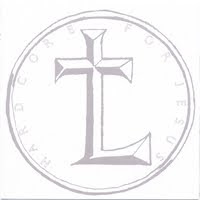 The Lead - Hardcore For Jesus
2006, Retroactive

Here's another collection that I'm not going to type the track list for. It's just too long. This is a complete collection of everything the Lead has ever done. The band started out as a noisy punk/speed band with the spunky Nina Llopis on bass and the manic Julio Rey on guitar and vocals. The older stuff on disc one is of very poor quality - some of it is hardly listenable and some of it just isn't that good, but it's nice to hear where they came from anyway. A lot of the songs from the early days have the same pattern: lightning fast verse where Julio and Nina can barely get the words out, then a groove-oriented chorus. The first disc is really for collectors only.

The second disc... now that's the treat. It includes their The Past Behind tape in all its raw glory for the first time on CD as well as their triumph - Burn This Record. To be honest I had The Past Behind on tape and loved it, but when I listened to it on this collection... gosh... I don't remember it being so noisy! I mean... really noisy and poorly recorded. So much so that I can't even really listen to it anymore. However, the reproduction of Burn This Record is spot on. It takes everything they'd done so far and mixes in a few thrash and speed metal elements to make a peculiar and unique record that showcases not only the bands talent, but their passion for evangelism. A lot of these songs are born out of their own experiences. So when Nina sings about the pain of abortion in "Who's the Victim?" she not just talking out of her own rear. "They lied! They lied! You see it isn't true, cuz every day I think of you!" you know she's been there before and it gives that song so much integrity. Burn This Record is brutal, raw, fast, and heavy and an essential addition to any metal head's collection.

Useless Fact: While the CD case lists the seconds-long track "Wink of an Eye" they actually forgot to put it on the disc. I think they're offering it for a free download, but to be honest it's so short it's not worth the effort to download it!
Posted by The Old Man at 10:12 AM