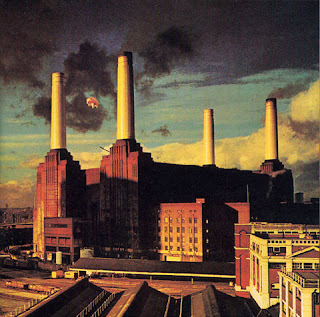 Pink Floyd - Animals
1977/1996, Columbia
1. Pigs on the Wing (Part One)
2. Dogs
3. Pigs (Three Different Ones)
4. Sheep
5. Pigs on the Wing (Part Two)
This is probably the most underrated and under-appreciated offering in all the Floyd catalogue. Usually I tell people this one is my favorite and they say, "Which one? Never heard of that one." Indeed, this one is my favorite. It's much more guitar-centric and even though "Dogs" goes on for seventeen minutes it never fails to keep my attention. Such interesting guitar parts in this one! One time I was spinning this disc while I was doing some chore and when the dogs started barking in "Dogs," my own dog started barking along with it. It was amusing and fantastically annoying all at the same time. If you'll notice, this one has two really short songs to start and end the disc then the long ones are in the middle - a flip-flop from the last one.
Useless Fact: The concept for this disc is that each song is taking aspects of humanity and comparing them to various animals.
Posted by The Old Man at 9:03 PM