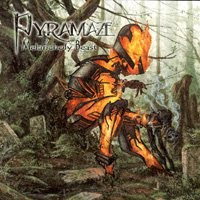 Pyramaze - Melancholy Beast
2004, Nightmare
1. Sleepy Hollow
2. Forsaken Kingdom
3. Melancholy Beast
4. The Journey
5. Until We Fade Away
6. Legend
7. Mighty Abyss
8. The Nature of Triumph
9. The Power of Imagination
You know, sometimes you can judge a book by its cover. I saw the cover above as someone's avatar on a message board and I was like, "That's probably awesome." So I tracked it down and you know what? It IS awesome. It features Lance King on vocals. It's sort of like Balance of Power (which Lance King sang for before this) in that it's proficient power metal but I think the keyboards are a little more upfront. It's also a good deal less commercial (at least compared to the one BOP album I've heard) but there's some great hooks here. Most of the songs are about fantasy stuff - "Sleepy Hollow" is about the story of the same name, "Legend" is about that Tom Cruise movie with the devil and the girl from Faris Bueller.
Before you get to wondering, yes, I know that Pyramaze has more albums out. To tell you the truth I don't like them that much. I think they used up whatever hook/riff writing energy they had on this album because none of the subsequent releases has succeeded in reeling me in at all.
Useless Fact: After Lance King left, Matt Barlow (Iced Earth) stepped in, now he's gone and they've got some other guy whose name escapes me.
Posted by The Old Man at 8:18 AM