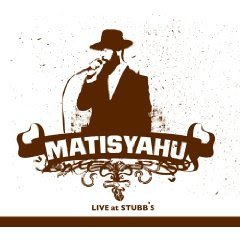 Matisyahu - Live at Stubbs
2005, Sony
1. Sea to Sea
2. Chop 'Em Down
3. Warrior
4. Lord Raise Me Up
5. King Without a Crown
6. Aish Tamid
7. Beat Box
8. Fire and Heights
9. Exaltation
10. Refuge
11. Heights
12. Close My Eyes
I got this disc based on the single "King Without a Crown" which I loved. The idea of a Hasidic Jew who does reggae is pretty cool. The album itself is pretty cool too - a fusion of reggae and rap. Though I don't spin this one but I don't have any particular reason for that. It's nice to hear some positive music from the Jewish perspective though.
Useless Fact: According to his biography Matisyahu used to be a big Phish fan until he realized that music and religion were not mutually exclusive.
Posted by The Old Man at 9:18 AM