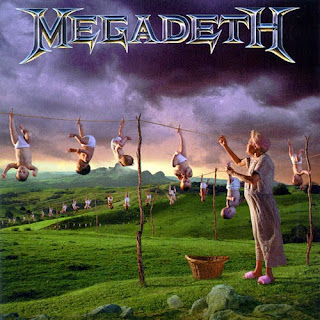 Megadeth - Youthanasia
1994/2004, Capitol
1. Reckoning Day
2. Train of Consequences
3. Addicted to Chaos
4. A Tout Le Monde
5. Elysian Fields
6. The Killing Road
7. Blood of Heroes
8. Family Tree
9. Youthanasia
10. I Thought I Knew It All
11. Black Curtains
12. Victory
Bonus Tracks:
13. Millenium of the Blind
14. New World Order (Demo)
15. Absolution (Demo)
16. A Tout Le Monde (Demo)
Youthanasia proves to be a further refining of the sound of the last album. They've slowed down quite a bit here and except for a few tracks like "Reckoning Day" and "Victory" pretty much stay in a mid-paced. There's also far more emphasis on melody as well. I really like a lot of the songs on here, especially "Train of Consequences," "Family Tree," and "Victory" but as a whole I don't think this album is as strong as the last few. I don't really listen to this one as much either. I will say that "A Tout Le Monde" is beautiful especially considering Megadeth has never been known for beauty and Dave Mustaine has never been known as a vocal powerhouse.
Useless Fact: For those few who are reading this Megadeth review and don't already know it, "Victory" contains the titles of various songs and albums in the lyrics. I used to think it was cheesy and dumb, but now I think it's kind of cool.
Posted by The Old Man at 10:06 AM