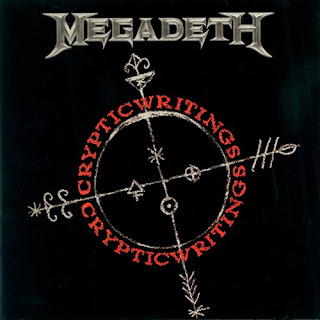 Megadeth - Cryptic Writings
1997/2004, Capitol
1. Trust
2. Almost Honest
3. Use the Man
4. Masterminds
5. The Disintigrators
6. I'll Get Even
7. Sin
8. A Secret Place
9. Have Cool, Will Travel
10. She-Wolf
11. Vortex
12. FFF
Bonus Tracks:
13. Trust (Spanish Version)
14. The Evil That's Within
15. Vortex (Alternate Version)
16. Bullprick
Megadeth's emphasis on melody continues here and the band adds some pop/rock sheen to the proceedings too. Though there's plenty of good metal to be had here. "Use the Man" has a cool thrash breakdown, "The Disintigrators" is fast and furious (not to mention one of my favorite 'Deth tracks ever), and "She-Wolf" is another thrasher that's a concert favorite to this day. I'm kind of glad I got to this disc after all these years because I don't really have any issues with it - even though it's the most commercial album the band did up until this point. I like this even better than Youthanasia! I might get crap for saying this but I think, as a whole, this disc has stronger songs than the previous one.
Useless Fact: I think it was at this point that the other people in the band and the management were trying to get Dave to make Megadeth into a total pop/rock band.
Posted by The Old Man at 10:16 AM