Megadeth - "The System Has Failed" 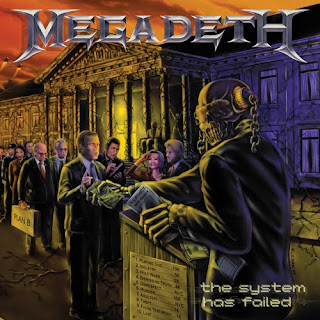 Megadeth - The System Has Failed
2004, Sanctuary
1. Blackmail the Universe
2. Die Dead Enough
3. Kick the Chair
4. The Scorpion
5. Tears in a Vial
6. I Know Jack
7. Back in the Day
8. Something That I'm Not
9. Truth Be Told
10. Of Mice and Men
11. Shadow of Deth
12. My Kingdom
Most describe this disc as a return to form and it absolutely is. The political rants are back. Mustaine's trademark snarl is back. Even the fast complicated riffs of old are back. From the pummelling notes of "Blackmail the Universe" you know it's on! Megadeth rises from the ashes of the metal meltdown of the late 90's and early 00's and puts out this brilliant and fresh release. While it's not quite as heavy as some of the earlier material I think it's a good mix of everything 'Deth has done but with an emphasis on technical thrash instead of commercial appeal. I like how the disc switches from a more melodic sounding song like "Die Dead Enough" and then kick into gear and tear it up with "Kick the Chair." This is, by far, one of my favorite Megadeth platters.
Useless Fact: Some record store clerk told me that Dave's struggle with nerve damage was just a set up to get out of his record contract. I don't think that's true... anyone have the real story? Also, "Shadow of Deth" is a reading of Psalm 23 and is meant to be Dave Mustaine's statement of faith.
Posted by The Old Man at 10:27 AM