Mad at the World - "Seasons of Love" 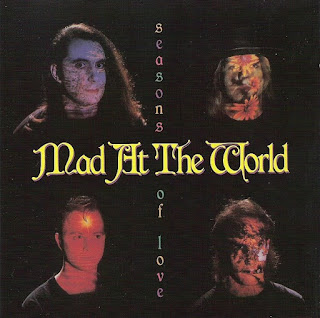 Seasons of Love sees the band finally excise the rest of their europop past and fully embrace hard rock. I think that was a good move because this is some pretty good stuff - simple hard rock, really. Vocalist Roger Rose has a slight feminine quality to his voice but sometimes he sounds a little like Alice Cooper. I think it's unique. Brother and drummer Randy Rose sings too but he hadn't really defined his vocal style yet on this record. My only problem is that a couple of songs are a little cheesy, specifically "Promised Land" and "So Insane" which are diatribes against drug use. That's okay but having lyrics like "Doing drugs is so insane!" is kind of cliche. I also think that they should have used the "Seasons of Love (Reprise)" as the second track instead of the original acoustic one. Having that ballad after the hard rocking "Narrow Road" is kind of a gear shift. Still a great rock record though.

Useless Fact: The reason why the band switch styles was because they thought it was just easier to do live shows with the hard rock style.
Posted by The Old Man at 8:34 AM

Labels: Mad at the World