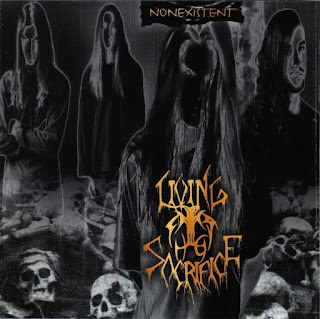 Living Sacrifice - Nonexistent
1992, REX
1. Emerge
2. Enthroned
3. Nonexistent
4. Haven of Blasphemy
5. ...To Nothing
6. Void Expression
7. Atonement
8. Distorted
9. Chemical Straightjacket
10. Without Distinction
Okay... I'm not sure what was going on here. The band kind of wants to be death metal, but they're not really sure they want to make the full plunge - just sticking their toes in the death metal pool. The guitars are downtuned and the infectious riffs are gone for the most part except for the song "...To Nothing" which has an awesome riff. Most of the songs though are just really fast picking. I would be remiss if I didn't mention DJs vocals which are terrible. They sound like Cookie Monster being drawn & quartered. Not pleasant. I used to like this back in the day, but now I just find it mostly tiresome. I do like the cover art though.
Useless Fact: I think this one was rereleased by Solid State too, but I think it's missing the distinctive early 90's REX layout that I always liked.
Posted by The Old Man at 5:44 PM