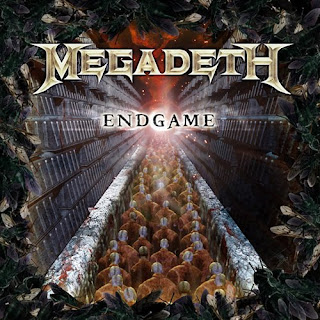 Megadeth - Endgame
2009, Roadrunner
1. Dialectic Chaos
2. This Day We Fight!
3. 44 Minutes
4. 1320
5. Bite the Hand
6. Bodies
7. Endgame
8. The Hardest Part of Letting Go...Seal With a Kiss
9. Headcrusher
10. How the Story Ends
11. The Right to Go Insane
Wow...just...wow. Sorry... I'm still kind of reeling from the pummeling this album gave me. This album is kind of like Rust in Peace on steroids. It's heavier, more technical, and arguably faster than their previous masterpiece. Almost like this album is intent on making that album cry like a little girly man. Seriously, age hasn't slown Dave and the boys down AT ALL. Granted, track 8 is a "ballad" and there are a few more mid-paced songs, but make no mistake - Megadeth is not playing around here. I've listened to this several times and I have to confess it's just now starting to grow on me. The problem with all the furious riffing and expert lead work is that it makes the album a little inaccessible. Almost as if it's challenging you to pry it open and learn its secrets. I'm just now starting to penetrate that hard casing and appreciate just what's going on here. "44 Minutes," "1320," and "Headcrusher" probably have the most easly recognized hooks. I just hope there's a radio station out there brave enough to play "Headcrusher" because it is one monster tune.
On another note I'm just going to come right out and say it: Megadeth is a better band than Metallica. Megadeth has been able to pull of a return to form that Metallica is still trying to manage. While Death Magnetic seems like Metallica struggling to recapture their magic, Davey boy's had it all this time. Kudos to him!
Useless Fact: There's a video for "Headcrusher" out there but it doesn't seem to have anything to do with the song.
Posted by The Old Man at 10:39 AM