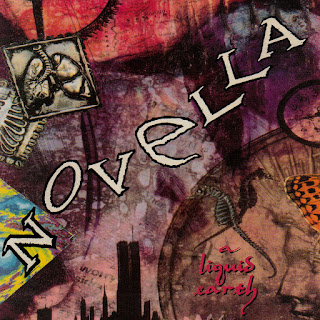 Novella - A Liquid Earth
1992, Starsong
1. Story
2. Bad Place
3. Don't You Run
4. Fire in the House
5. Heaven's On My Mind
6. Let's Talk About Love
7. Right In the Middle
8. Colour of Love
9. Missionary
10. Stranger
I didn't like the first one as much until recently... so it would stand to reason that I liked this one a lot better when it first came out even though it seems like everyone prefers the debut. Still, it's hard to argue that this isn't one solid rock platter. I don't think it's quite as hard as One Big Sky though. This disc still gets many spins even though it's old. I got to see these guys on tour at Kingdom Bound and they were pretty decent. They were scheduled to play an encore but nobody cheered for an encore. We all just sort of slowly dispersed. I bet that made them feel like crap! To be fair, it was in the afternoon and afternoon shows usually didn't have encores. They also had this huge world-shaped balloon that had "A Liquid Earth" printed on a banner hanging over their merch tent.
Useless Fact: Novella pretty much disappeared after this one. I've heard that the vocalist went on to do some solo stuff but I've never seen nor heard any of it.
Posted by The Old Man at 10:24 AM