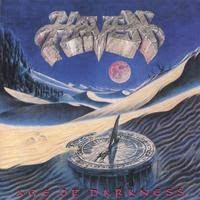 Haven - Age of Darkness
1991/2005, Retroactive
1. Tenacious Volition
2. Divination
3. When You Said Goodbye
4. Holly
5. Exaltation
6. The Witching Hour
7. Seance
8. Spend My Life With You
9. Unchanging Love
10. Blood of the Lamb
11. Once Upon a Time
Bonus Tracks
12. 30 of Silence
13. Mamma
14. Black Friday
15. All the Wrong Heroes
16. Mudshoe Moses
17. The Sea
18. Her Eyes
I never really liked Haven that much. I wasn't terribly impressed with Your Dying Day originally but I like this one alright. I picked up the Retroactive's reissue to replace my CD rotted copy. Speaking of which, this is some fine power metal. A lot of cool riffs and and a few catchy almost radio-ready songs like "When You Said Goodbye." I also really like the classical interludes, "Tenacious Volition" and "Exaltation." Thought the brightest spot for me on this whole album is the album closer, "Once Upon a Time" in which Kevin sings over the guitar which is actually running backwards.
Of course the Retroactive version comes with some extra tracks from Kevin Ayer's new (well... in 2003 anyway) band Thunder Bucket. These were a pleasant surprise. It's not metal but really good groove oriented modern rock with good vocals and lyrics. I found myself really digging these tracks. I almost wish Thunder Bucket would have come out with some more stuff.
Useless Fact: Haven released a third self-titled album. I've heard it's not as good as the previous ones.
Posted by The Old Man at 7:38 PM