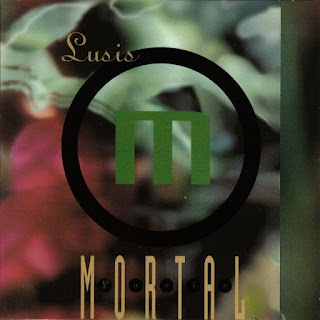 Mortal - Lusis
1992, Intense
1. Enfleshed (The Word is Alive)
2. Mytho-X
3. If Ever Maria
4. Fisherman
5. Painkiller
6. Tuesday Assassin
7. Rescinding
8. Cryptic
9. Miracle Man
10. Santa Cruz
11. S.F.N.
12. Sinister
13. Enfleshed (Alive is the Word)
Lusis has the distinction of being the very first industrial record in the Christian market. After this was released Circle of Dust, Under Midnight, and a few others were able to get off the ground. I was just amazed by it when it was first released. It sort of sounds a little like Nine Inch Nails but with some pop flavor to it, not unlike EMF. The guitars aren't quite as crunchy or as upfront as other bands but that's okay because I think there's a bit more going on in terms of beats, samples, and other techno sounding stuff. "Mytho-X" and "Painkiller" have some infectious beats and hooks. I still love this one just as much as I did when it first came out.
Useless Fact: There are several samples from Star Trek V: The Final Frontier so the album gets an extra point or two in my book.
Posted by The Old Man at 8:21 AM