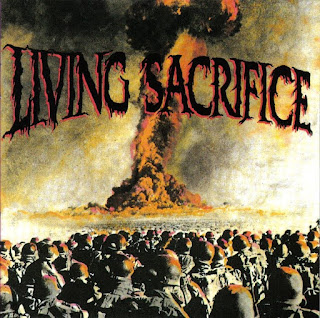 Living Sacrifice - Living Sacrifice
1991/1999, Solid State
1. Violence
2. Internal Unrest
3. Second Death
4. Obstruction
5. Walls of Separation
6. Phargx Imas
7. No Grave Concern
8. Dealing With Ignorance
9. The Prodigal
10. Anorexia Spiritual
I've come to the conclusion that Living Sacrifice is one of the most overrated bands out there. This debut is probably the best thing they put out. It's thrash - full on early 90's thrash - miles away from the hardcore nonsense they've put out the past few years. I will say the riffs are pretty awesome - "Violence" and "Internal Unrest" are two songs that will make you pump your fist in metal triumph. People say that it sounds like Slayer but having never listened to Slayer, I can't really say. This is also the best DJ's vocals ever sounded. I don't really spin this but once in a great while, but it's still a good metal platter.
Useless Fact: My edition is the reissue from Solid State records made after they hit the "big time." There isn't any extra tracks but there are some good liner notes from the band.
Posted by The Old Man at 5:33 PM