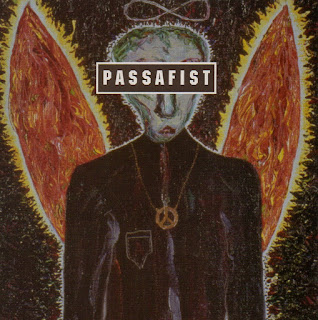 After the sad demise of Chagall Guevara a couple of the members went on to form Passafist. Passafist is an industrial band that, thankfully, sounds nothing like Mortal, Circle of Dust, Under Midnight, or even NIN. They have a bit more of an alt-rock sound - sort of a techno Chagall Guevara. There's some dang good music here to be had including a cover of "Street Fighting Man" originally by Rolling Stones, I think.

Useless Fact: There are two different covers for this one. The one above I have but some of my fellow Christians got their panties all in a bunch over it so there's another one that's all black.
Posted by The Old Man at 11:32 AM