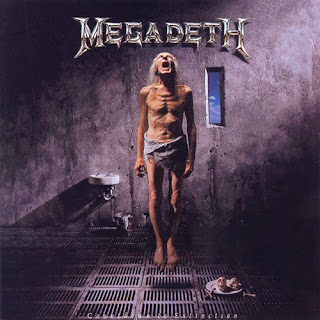 Megadeth - Countdown to Extinction
1992/2004, Capitol
1. Skin O' My Teeth
2. Symphony of Destruction
3. Architecture of Aggression
4. Foreclosure of a Dream
5. Sweating Bullets
6. This Was My Life
7. Countdown to Extinction
8. High Speed Dirt
9. Psychotron
10. Captive Honor
11. Ashes in Your Mouth
Bonus Tracks:
12. Crown of Worms
13. Countdown to Extinction (Demo)
14. Symphony of Destruction (Demo)
15. Psychotron (Demo)
Here we go... the sellout. But... wait a minute! This is actually pretty good. No, not pretty good. How about "friggin' awesome!" I think of all the metal bands that tried their hand at commercial success, Megadeth did it the best. Mustaine somehow melded the furious technical thrash he was known for and fused it with some pop-appeal but didn't compromise on the heavy. There's so love ballads or anything here, not like some other bands I know *cough* *cough* Metallica *cough*. While the band does slow down some for a few songs ("Foreclosure of a Dream" is the best example) there are plenty of full throttle metal tracks to make me happy. It's too bad that they never got that #1 spot!
Quick word on the extra tracks: I think the demos here are actually better than what made it on the album, so they're definitely worth listening to! The unreleased track "Crown of Worms" is a blazing slice of metal too.
Useless Fact: According to the liner notes of my reissue, when Dave Mustaine heard that Countdown reached #2 he was PISSED! Mainly because he's made it his life's mission to show up Metallica.
Posted by The Old Man at 9:40 AM