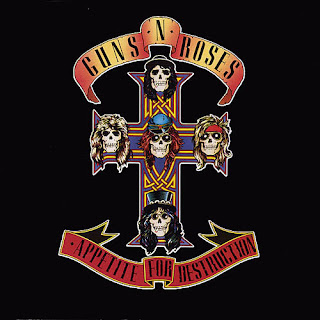 Guns N' Roses - Appetite For Destruction
1987, Geffin
1. Welcome to the Jungle
2. It's So Easy
3. Nightrain
4. Out Ta Get Me
5. Mr. Brownstone
6. Paradise City
7. My Michelle
8. Think About You
9. Sweet Child O' Mine
10. You're Crazy
11. Anything Goes
12. Rocket Queen
I remember the first time I saw the video for "Welcome to the Jungle." Man... it was like nothing I'd ever seen or heard. It was a bit.... scary. The band had this raw power behind the music that just made you wonder just how hard hard rock could be. Axel Rose was the sleaziest, grimiest, dirtiest vocalist around. The album itself is full of that selfsame hard rock. It's all about the seedier side of life and doesn't care what you think. Slash is truly earns his "guitar hero" stripes with this one too. It's too bad the band was tripped up by Axel's ego - they never were as good as they were on this disc. Incidentally, this was the first disc I ever heard the "f" word in.
Useless Fact: The cover pictured was actually the second cover choice. The first cover had a robot and a monster on it as well as a depiction of a recently raped women. I think they made the right choice because this cover, in addition to being less depraved, is more iconic.
Posted by The Old Man at 7:26 PM