Mortification - "Scrolls of the Megilloth" 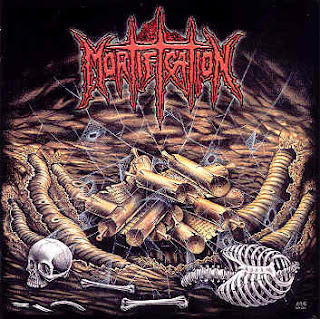 Mortification - Scrolls of the Megilloth
1992/2004, Soundmass
1. Nocturnal
2. Terminate Damnation
3. Eternal Lamentation
4. Raise the Chalice
5. Lymphosarcoma
6. Scrolls of the Megilloth
7. Death Requiem
8. Necromanicide
9. Inflamed
10. Ancient Prophecy
Bonus Tracks:
11. Terminate Damnation (Demo)
12. Lymphosarcoma (Demo)
13. Necromanicide (Demo)
14. Scrolls of the Megilloth (Demo)
This disc is usually hailed as the band's best but I don't care for it as much. Seems to be a pattern with me. This one is full on death metal and it's all about speed and blast beats and less about riffing and hooks. I think that's why I don't enjoy it as much. Loved the hooks on the debut but this one is just pounding. Granted, there's still great songs here. I like "Nocturnal," "Scrolls..." and "Inflamed." "Ancient Prophecy" is the band's first try at an epic tune but I think it's just boring. I've just never been one for death metal or grindcore so I only spin this once and awhile.
My Soundmass rerelease has some cool demo bonus tracks that I ended up liking more than the studio versions.
Useless Fact: Jayson Sherlock drew the cover for this disc too.
Posted by The Old Man at 8:59 AM