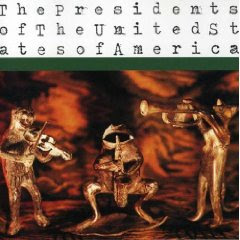 If you're familiar with this band at all it's probably for either "Peaches" (which was once featured on King of the Hill) or "Lump" OR the Weird Al parody "Gump." Either way you probably enjoyed the songs and never thought another thing about them. Granted the fact that the bass player only has 2 strings and the guitarist only has 3 just kind of screams "gimmick" to me but the band proves that they can do a lot with a little. Most of this disc is a novelty, but I think the music is fun and interesting enough to warrant repeated listens. I especially like the bass grooves in songs like "Boll Weevil" and "Dune Buggy" (the latter being a song about the Spider-Man's Spider Car). I think this band did one more disc which went unnoticed, then fell off the map.

Useless Fact: "Kick Out the Jams" was originally a song by an old band called M5, I think. I'm pretty sure the lyrics have been changed in the President's version.
Posted by The Old Man at 8:34 AM

Labels: The Presidents of the United States of America