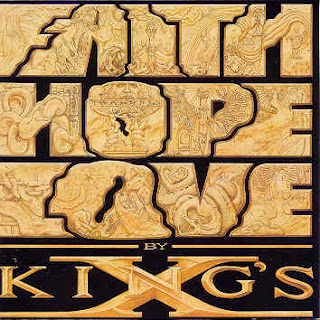 This was King's X's most epic and progressive disc up to this point. This is also the one that got them the most media attention. "It's Love" got some radio airplay and the band itself was getting a lot of attention, mainly from the Christian market. I don't like this one quite as much as Gretchen but that's to say this isn't a textbook example of great music.

Useless Fact: "Legal Kill" is an anti-abortion song that wasn't actually supposed to be on the album. Producer Sam Taylor took only Ty Tabor into the studio and it was on the album despite the fact that both Doug Pinnick and Jerry Gaskill objected. Taylor also put the Ist Corinthians quote in the liner notes against the band's wishes.
Posted by The Old Man at 9:44 AM