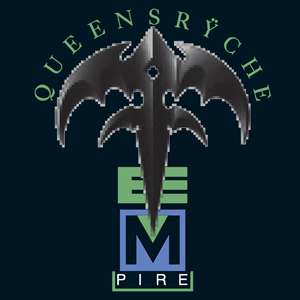 Queensryche - Empire
1990/2003, EMI
1. Best I Can
2. The Thin Line
3. Jet City Woman
4. Della Brown
5. Another Rainy Night
6. Empire
7. Resistance
8. Silent Lucidity
9. Hand on Heart
10. One and Only
11. Anybody Listening?
Bonus Tracks:
12. Last Time in Paris
13. Scarborough Fair
14. Dirty Lil' Secret
Queensryche makes no attempt to compete with the success of Mindcrime. Empire has no theme, no concept, it's just an album full of solid stand alone songs which ended up being the most commercially viable music they'd ever made. MTV played "Silent Lucidity" and "Jet City Woman" constantly - enough to make someone hate those songs. In fact usually if someone says their favorite Queensryche song is "Silent Lucidity" I have to restrain myself from rolling my eyes. That's not to say this is a bad album...far from it! I don't quite listen to this one as much but it's still a good commercial hard rock disc. Empire also boasts the finest bonus tracks of any of the reissues. So good, in fact, that they could have been on the album originally and you'd never know the difference. I especially love the moody take on Simon & Garfunkel's "Scarborough Fair."
Useless Fact: "Last Time in Paris" was on the Ford Fairlane soundtrack. The band also made a home video around this time called Building Empires which I have. It's a good collection of the band's videos up until that point though it's definitely heavy on Empire material naturally.
Posted by The Old Man at 1:07 PM