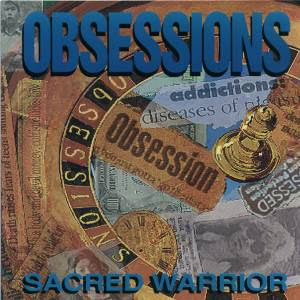 Sacred Warrior - Obsessions
1991, Intense
1. Wings of a Dream
2. Sweet Memories
3. Turning Back
4. Obsessions
5. Kamakazi
6. Remember Me
7. Fire From Heaven
8. Temple's On Fire
9. Mad Man
Rack up another metal classic for Sacred Warrior. This would, sadly, be their last disc. I confess that I didn't like this one nearly as much when it first came out. It seemed a little too "ballad-y" for me. "Sweet Memories," "Turning Back," and "Remember Me" always put me off because they were so slow. There is no logic in that I know, but I was young. I appreciate these tracks far more now as an adult. Still can't really say that this is one of my favorites from the band but it's still a tight consistent metal offering.
Useless Fact: As stated before this would be the band's last disc. Intense Records released a disc called Classics that was a generic "best of" comp with no new material specifically designed to wring some more money out of Sacred Warrior fans. They also did a live album back in 2001 and there have been rumors of a new album, but nothing concrete yet.
Posted by The Old Man at 8:53 AM