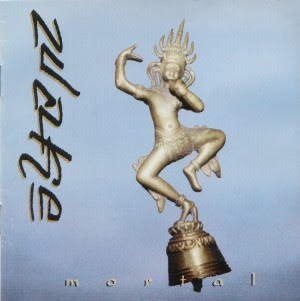 Mortal - Wake
1994, Intense
1. Paradigm One
2. June First
3. Mother's Day
4. Vial
5. Speed of Sound
6. Filter
7. Oceanful
8. Serpent-Teen
9. Moons & Suns
10. Fall
11. Sold
12. God of 3 Strings
13. Nowhere Man
14. To My Darling Whipporwill
I remember reading some interviews of these guys back around this period. They were saying that they'd taken industrial as far as they could and that guys like Scott Albert (Circle of Dust) could take it further. Then we get Wake, which is not industrial at all but alt-rock...scratch that... it's Mortal doing it's best Nirvana impression. It didn't really work for me when it first came out. I remember liking "June First" and "Mother's Day" and I still like them. The rest of the songs are okay but Mortal really excells at ballads. "Speed of Sound" is an enchanting little tune that reminds me a lot of "Bleeder" from the Brow Beat comp. It's so weird because the electric songs are so forgettable but I LOVE the ballads here. Useless Fact: "Nowhere Man" is a Beatles cover. Also, after this record the band broke up and reformed several times. Each time they said that "God told them" to break up. Uh... okay.
Posted by The Old Man at 8:39 AM