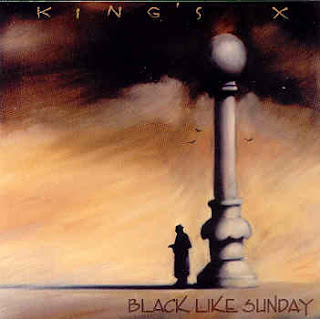 King's X - Black Like Sunday
2003, Metal Blade
1. Black Like Sunday
2. Rock Pile
3. Danger Zone
4. Working Man
5. Dreams
6. Finished
7. Screamer
8. Bad Luck
9. Down
10. Won't Turn Back
11. Two
12. You're the Only One
13. Johnny
14. Save Us
I have a hard time looking at this one as an official release. Really, it's mostly old songs the band was doing back when they were called The Edge and Sneak Preview. Only they're all rerecorded with all the band's new gear. There's only a few stand out cuts here like "Danger Zone," "Finished" and the title track. The rest are merely adequate. You can definitely hear how much they were influenced by punk rock and The Police. This is more for fans to hear where the band came from, not really something to turn someone on to the band who'd never heard of them before.
Useless Fact: The track list on the back of the CD case is wrong. The one I've listed is correct. Also, the cover was chosen as part of a contest - fans were able to create covers and send them in and the band chose the one they liked the best. I think they made a good choice because I saw some of them... and man, were they funny!
Posted by The Old Man at 9:58 AM