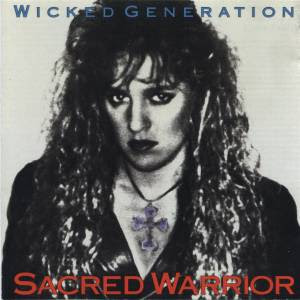 Wicked Generation is a loose concept album about an abused young woman trying to find peace. She tries just about everything until she finally finds God. As far as concepts go it's alright but not every song has to do with that story so it's not as cohesive. That being said this is my second favorite right behind Master's Command. I was listening to "Little Secrets" the other day and couldn't help but think of Queensryche's "The Mission." Yes, Sacred Warrior were pretty much the Christian Queensrcyhe... but they did it so well! Though since Queensrcyhe modified their sound so much the description only applies to the early 'Ryche stuff. Anyway... I love songs like "In the Night" that are so melodic yet still manage to rock hard! Then there's full throttle offerings like "Warriors." It's nice to have a band like Sacred Warrior whose musical quality never deteriorated from album to album.

Useless Fact: So... I'm guessing the person on the cover is the girl the album is about but for the longest time nobody in my family knew whether it was a girl or a boy. I mean... she does look pretty androgynous.
Posted by The Old Man at 8:43 AM