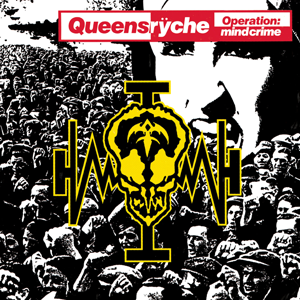 Queensryche - Operation: Mindcrime
1988/2003, EMI
1. I Remember Now
2. Anarchy - X
3. Revolution Calling
4. Operation: Mindcrime
5. Speak
6. Spreading the Disease
7. The Mission
8. Suite Sister Mary
9. The Needle Lies
10. Electric Requiem
11. Breaking the Silence
12. I Don't Believe in Love
13. Waiting For 22
14. My Empty Room
15. Eyes of a Stranger
Bonus Tracks:
16. The Mission (Live)
17. My Empty Room (Live)
So I hear this is the album that finally broke the band into the mainstream. MTV played 'em. They were featured in magazines. Man, wish I could have been there for that. Operation: Mindcrime is probably one of the finest concept albums this side of Ayreon. It succeeds in doing one important thing - tells an engrossing and compelling story. At the end you'll feel like you've been on a roller coaster ride. For those completely unfamiliar, the story is about a drug addict named Niki. He gets mixed up with an anarchist movement and falls in love with a nun. There's more detail of course but I don't want to spoil it. I want you to go out right now and buy yourself a copy. Then you are to sit in your smoking room in your smoking jacket with a nice cigar and glass of wine and enjoy an hour or so of complete awesomeness. Aside from the story this disc also has some rippin' tunes with hooks big enough to catch Jonah's whale. Back in the day "I Don't Believe in Love" was my jam... before I got married. This is my second favorite just behind Rage and it occasionally changes places with it depending on what mood I'm in.
I'm going to take a minute to do you a favor. Don't bother with Operation: Mindcrime II. It's not that good. It was supposed to answer the question "Who Killed Mary?" but I never got the answer to that through the lyrics. Also, the music is nowhere near as interesting and the story completely unravels at the end. I'm not even sure what the point of the thing was other than to sucker old fans to check out Queensryche's new sound. Newsflash guys: there's a reason we don't listen to your new stuff.
Useless Fact: The band made a video for "Eyes of a Stranger." It's pretty cool. It sums up the story quite nicely.
Posted by The Old Man at 12:51 PM