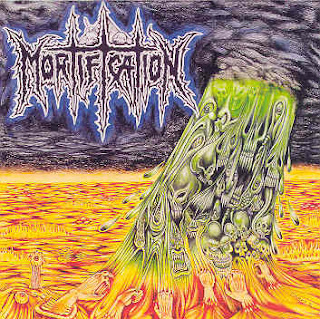 Mortification - Mortification
1991/2007, Soundmass
1. Until the End
2. Brutal Warfare
3. Bathed in Blood
4. Satan's Doom
5. Turn
6. No Return
7. Break the Curse
8. New Awakenings
9. The Destroyer Beholds
10. The Journey of Reconciliation
11. The Majestic Infiltration of Order
Man... when Morty first arrived on the scene in '91 I didn't think there was anything more intense. They were billed as death metal but really they were just a tight thrash unit with death metal vocals. I still think to this day Steve Rowe's growl is the best growl in metal. The guitars are downtuned and dark and the whole album just has cool riff after cool riff. Jayson Sherlock's drumming is simply amazing. He's just all over the place. I usually listen to the guitars when I'm listening to metal but on here... I listen to the drums too. How could you not? Not only can he play fast but he's got this cool rolling style to his playing that just makes the drums really seem like another instrument unto themselves instead of just a backing for the rest of the band. This debut is truly an amazing, groundbreaking record that remains one of my favorites today.
Soundmass recently reissued this CD in a digipak. The disc has been remastered and I think it makes the disc sound heavier than it did before. The sound quality on the original was nothing to write home about. There's no extra tracks unfortunately. Still a good buy if you can't find the original.
Useless Fact: This album had two covers. One was plain black with the band's logo and the other one was pictured. At one point I had both covers on tape. Now I just have the one pictured.
Posted by The Old Man at 8:50 AM