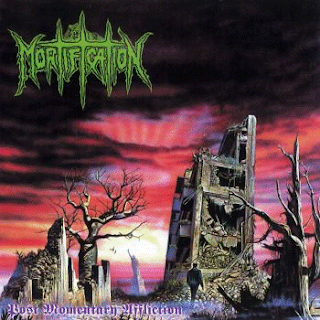 Mortification - Post Momentary Affliction
1993/2008, Metal Mind
1. Allusions from the Valley of Darkness
2. From the Valley of the Shadows
3. Human Condition
4. Distarnish Priest
5. Black Lion of the Mind
6. Grind Planetarium
7. Pride Sanitarium (reprise)
8. Overseer
9. This Momentary Affliction
10. Flight of Victory
11. Impulsation
12. Liquid Assets
13. Vital Fluids
14. The Sea of Forgetfulness
Bonus Tracks:
15. Butchered Mutilation
16. Grind Planetarium (live)
17. Distarnish Priest (live)
18. From the Valley of the Shadows (live)
I'm glad these guys decided to move away from the grindcore. Post Momentary Affliction is actually a good mix of the previous album's death metal/grindcore sound with the catchy thrash of the debut. When it works, it totally works. "Distarnish Priest" and "Grind Planetarium" are awesome songs. As well as "Human Condition" and "Impulsation." However, "Overseer" is a 9-minute long epic track that's not nearly interesting enough to justify its length. Also, the album has a lot of filler - interludes like "Black Lion of the Mind" and "Liquid Assets." For me, the disc kind of falls apart during the second half, with not as many "real" songs on it. The stilted rhythm and structure of "Vital Fluids" kind of ruins the momentum established by the other tracks. Still, I pull this one out more often than Scrolls.
*Update* This disc, especially the second half has grown on me with repeated listens. I used to hate "Overseer" but now I'm okay with it. Likewise, the momentum isn't nearly as broken as I seemed to think it was at first. I'm actually enjoying it far more than I ever did originally!
My edition is the Metal Mind reissue that has been remastered with extra tracks. I don't care much for the live tracks (as I already have Live Planetarium) but it's great to have "Butchered Mutilation" on here. That track is brutal and heavy. I wish they would have done a few more technical songs like this one. I should also mention that there are several misspellings on the track list, and the person who wrote the liner notes obviously has English as a second language. It's disappointing, but there's no problems with the music.
Useless Fact: There were two covers for this album. One was drawn by Jayson Sherlock and was used for the Christian market. The other, pictured above, was used by Nuclear Blast in the secular market. Truth be told, I like Jayson's better. This was also his last studio album with the band.
Posted by The Old Man at 9:17 AM