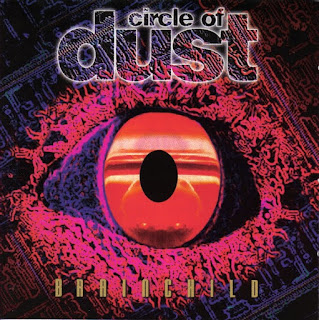 Circle of Dust - Brainchild
1994, REX
1. Cranial Tyrant
2. Telltale Crime
3. Prayers of a Dead Man
4. Regressor (Aggressive Mix)
5. Enshrined
6. Course of Ruin
7. Descend
8. Deviate
9. Pale Reflection
10. Aggressor (Regressive Mix)
Did you know that Circle of Dust's second album was not actually their second album? Yeah... this album actually started as a side project of Scott Albert and REX producer Doug Mann called Brainchild - the album was called Mindwarp. In '94 Scott remixed the disc and REX rereleased it to the mainstream as the second Circle of Dust album. Got it? Good. Brainchild is a lot heavier than the previous album(s) as the downtuned, chunky thrash riffs are the focus of most of the songs. It's plenty industrial too with bizarre samples of everything from Robocop 2 to Ren and Stimpy along with strange noises and beats. I remember listening to the original Brainchild album a lot and this rerelease is pretty similar.
Useless Fact: I'm told that the "Deviate" on this version is the "Sawed-off Shotgun Edit" from the Metamorphosis compilation, but I'm too lazy to verify that. Also some of these tunes were used for the MTV show MTV Sports back in the day.
Posted by The Old Man at 9:01 AM