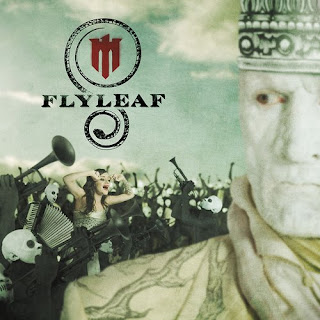 I've got to hand it to Flyleaf. They had a lot of commercial success with their debut album, but even with all the success they never compromised their Christian stance. It takes some brass ones to put out an album like this these days. It's far bolder in terms of Christian themed lyrics than the last one. Take the first track "Beautiful Bride" for example: "Beautiful bride/ Body of Christ/ One flesh abiding/ Strong and unifying." Their attitude seems to be, "Yeah, we're Christian - deal with it." I can't tell you how much I respect that! Thankfully the music is backs up the lyrics just fine. Lacey's vocals have improved even though she doesn't do much growling, unfortunately. The band as really refined their sound into a swirling whirlwind of guitars and emotional, pleading hooks. They have a low end to their distortion that straddles the line between the crushing force of Korn and the groove of King's X. Yeah... I said King's X. If you're not moved by the combination of music and lyrics in songs like "Missing" and "This Close" then you have no heart. That being said there are a couple tracks that I could have done without - I don't even remember how "Circle" goes and for some reason I've never cared for "In the Dark." I will also say that the production seems a bit on the noisy side to me but that could just be the speakers in my car.

Another thing I wanted to comment on was the album's theme. The liner notes do not contain lyrics but notes from "The Commander" to the "Passerby Army" detailing their struggle with the "Dread Army" and his personal struggles with his daughter. It's cool, creative, and well-written but I kind of wish they would have printed the lyrics too. Still, this is a great record. Hopefully it won't take them four years to do another one!

Useless Fact: There's a special edition of this disc available that Walmart didn't have when I went to get it. That edition has some extra tracks on it. Shouldn't be too hard to find if you don't live in some podunk town like I do.
Posted by The Old Man at 9:54 AM