Deliverance - "What a Joke" 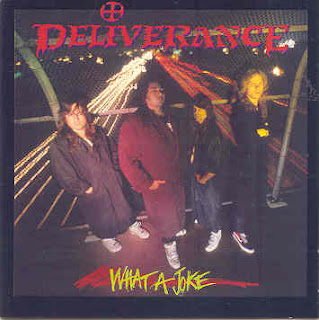 Deliverance - What a Joke
1991, Intense
1. Intro
2. Prophet of Idiocy
3. Pseudo Intellectual
4. Cheeseburger Maker Du
5. What a Joke
6. Chipped Beef
7. After Forever
8. It's the Beat
9. A Product of Society
10. Happy Star
11. J.P.D.
12. Pray
13. Silent Night
14. J.I.G.
15. Purgatory Sandwich With Mustard
16. Attack
From what I've heard, Jimmy Brown was really tired of doing speed metal at this point and longed to do something a bit different - more creative. However, the record company insisted on another disc like Weapons but they got this. It's full of joke songs and filler and even a dig at the last album in the intro. Still, even when the guys are half-assing it they manage to put out some quality speed metal. "Pseudo Intellectual" and "A Product of Society" are prime metal cuts. I also like the the cover of Black Sabbath's "After Forever." I am even amused by all the short tracks as they're not nearly long enough to be annoying. Not to mention there's a better version of "Attack." When the heck are they gonna rerelease this one?
Useless Fact: Roger Martinez of Vengeance Rising provides some guest vox on "It's the Beat," a song criticizing those who think rock and metal are evil just because of the beat.
Posted by The Old Man at 8:40 AM