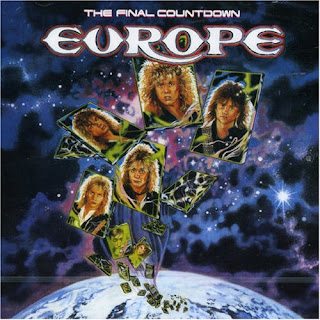 Europe - The Final Countdown
1986/2001, Sony
1. The Final Countdown
2. Rock the Night
3. Carrie
4. Danger On the Track
5. Ninja
6. Cherokee
7. Time Has Come
8. Heart of Stone
9. On the Loose
10. Love Chaser
Bonus Tracks:
11. The Final Countdown (live)
12. Danger on the Track (live)
13. Carrie (live)
A lot of people don't know this but Europe was actually genetically engineered in lab (located in Area 51) specifically designed to make money for record companies. Their songs were assembled by a team of highly trained engineers to stay in your head for days. I think the actual songs are meant to be audible viruses that brainwash you into buying the album. Well... when I was little I succumbed to the virus and here is the CD in my collection. It's pretty much everything that was bad about 80's rock in the day. The songs are really cheesy too. I still like to spin it every once in awhile because I'm all nostalgic like that. I should mention that the live tracks are nothing special.
Useless Fact: The lab that built Europe also built such popular bands as New Kids on the Block, N*Sync, and Backstreet Boys.
Posted by The Old Man at 8:53 AM