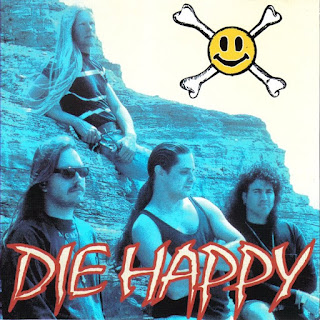 Die Happy - Die Happy
1993, Intense
1. Renaissance
2. Perpetual Motion
3. Die Happy
4. Bone Doctor
5. Cage
6. Real
7. Slide Rule
8. Painted Truth
9. Celebration
10. Melrose
11. Silver Cloud
Die Happy features most of the members of Vengeance Rising minus vocalist Roger Martinez. What does that make Die Happy? Friggin' awesome. Those first two Vengeance Rising albums had some of the most fantastic riffing I've ever heard and that continues with Die Happy. Only now instead of Roger Martinez's barking we've got the soulful vocals of Robin "Kyle" Basuri. Now, I liked Martinez's thrash vocals but Basuri's pipes really made this band a force to be reckoned with. Let's talk about the riffs again shall we? "Perpetual Motion" has a cool mid-paced swagger. "Bone Doctor" sounds like it could have been an old Vengeance riff. Then we've got "Cage" which actually was an old Vengeance tune that was supposed to be on the third album. It's kind of sad because if you compare this with Vengeance Rising's third album, Destruction Comes it's pretty obvious where all the talent in the band was.
Useless Fact: They guys engineered some odd equipment for this record including a "wok box" which is a talk box and wah pedal put together. It sounds pretty cool.
Posted by The Old Man at 9:14 AM