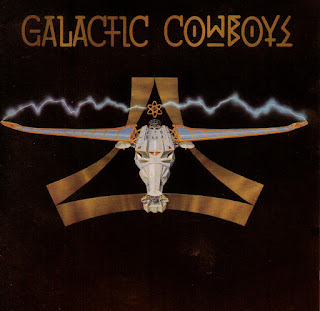 Galactic Cowboys - Galactic Cowboys
1991, Geffin
1. I'm Not Amused
2. My School
3. Why Can't You Believe In Me?
4. Kaptain Krude
5. Someone For Everyone
6. Sea of Tranquility
7. Kill Floor
8. Pump Up the Space Suit
9. Ranch on Mars (reprise)
10. Speak to Me
The Galactic Cowboys hail from the same area as King's X and started out with a similar sound. I think the Cowboys are a good deal heavier. The distortion on their guitar is fat and thick - it almost sounds like a jet engine taking off. They've also got a little bit of a "spacey" vibe going on. They've got great harmonies too, especially on "Why Can't You Believe In Me?" and "Someone For Everyone." Love this album! Though I haven't ever made it through the ten-minute epic "Speak to Me" all the way through.
Useless Fact: The band made a video for "I'm Not Amused." I know this because I saw it when it first premiered on MTV. It was on this segment called "Crank it or Spank It" and I don't remember what the verdict was. I never saw the video after this so it must have been "spank it" which is no surprise because MTV never knows what is good.
Posted by The Old Man at 9:49 AM