One Bad Pig - "I Scream Sunday" 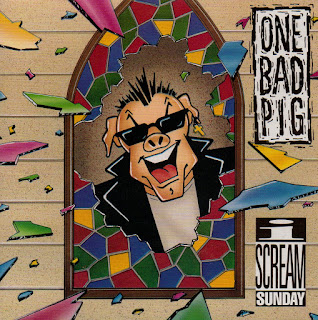 One Bad Pig - I Scream Sunday
1992, Myrrh
1. Take a Look at Yourself
2. You're a Pagan
3. I Scream Sunday
4. Man in Black
5. Not Love Money
6. Cut Your Hair
7. For a Good Man
8. Ice Cream Sundae
9. Bird Nest
10. Up the Nose
11. Spirit of Murder
12. Sober Up
13. Pad Thai
14. Never Forget the Cross
15. Wholly My Lord
I've always liked how One Bad Pig could present a no-holds-barred Christian message yet still have a goofey sense of humor. I Scream Sunday contains the absolute coolest song they ever did: "Man in Black." Why is it the coolest? Because Johnny Cash, the man in black himself, sings on the song. How cool is that?! The rest of the album is full of fun rock/metal songs just like the last one. Can I just reiterate that I love the guitar work on these Pig albums?
As a side note in "Take a Look at Yourself" the lyrics go, "Time to write another song/Just call it '51.'" I always wondered if that was a dig at Deliverance because of their song "23." Jimmy Brown himself has admitted to not being a shining example of Christianity when that song came out.
Useless Fact: Some of the members of One Bad Pig were actually in Lust Control when that band started. I can't remember which one's though - I think Paul Q-Pek.
Posted by The Old Man at 9:10 AM