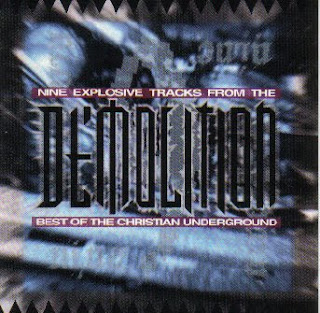 I've said before that I usually don't like demos, so it's a bit surprising that I absolutely LOVE this collection. That's probably because there's some great music on here. Thresher was a great metal band that never saw a proper label release and Consecrator is a searing slice of Believer-esque technical thrash. This disc also has "Glide" - the first Hot Pink Turtle song I ever heard and what initially turned me on to the band. Also, Immortal appears with "Senseless Abandon" which, if you remember, was on Circle of Dust's first album (the very first one, not the do-over). The only problem is the mastering in "Puppet of Beauty" by Sardonyx. The audio drops out during the track and it's very distracting.

Useless Fact: Out of the nine bands on here, only one (Hot Pink Turtle) went on to record a full length album with REX. Why those dang fools over at REX didn't snap up Thresher and Consecrator is beyond me. Immortal became Circle of Dust and recorded with REX though I'm not counting that because Circle wasn't thrash like Immortal was.
Posted by The Old Man at 8:50 AM