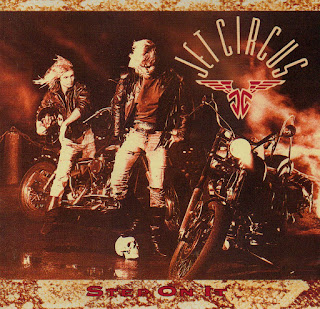 Jet Circus - Step On It
1991, Wonderland
1. Victory Dance
2. Rockin' Horse
3. Jet Blue
4. Step On It
5. Ghost Town
6. Break This Jail
7. Be Bop a Lula
8. Train
9. Run
10. Dress in White
Man, I love Jet Circus. If I had to put a label on their sound I guess it would be rock-a-billy fuzz metal. I know that probably doesn't tell you anything but that's the best I can think of. There is a lot of cool fuzz - especially on the bass ("Excuse me, you know God loves bass guitar!") take a track like "Jet Blue" for example. The song is backed by the low fuzzy bass with the psycho guitar over it. A drum machine handles the percussion and it gives the album a bit of a dance flavor too sometimes. There was truly nothing like this band. I even like the faux-rap song "Victory Dance." "Be Bop a Lula" is a cover from some 50's or 60's group but I can't remember the name.
Useless Fact: Apparently this CD came out once already with a different cover (it had 3 guys on it instead of 2). Oh, and the band recorded another disc titled No Mercy For the Living Dead which was never released for some stupid reason. Their latest album (that I don't have) is Look at Death Now and I think it's just Ez Gomer himself on that one.
Posted by The Old Man at 8:44 AM