Sixpence None the Richer - "The Dawn of Grace" 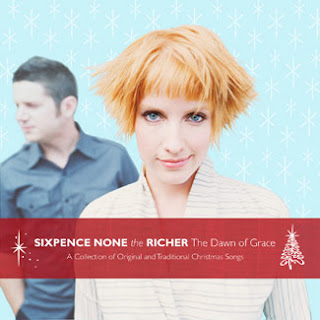 Sixpence None the Richer - The Dawn of Grace
2008, Nettwerk

The Dawn of Grace is fast becoming one of my favorite Christmas albums. All the songs are awesome. Their takes on some of the more traditional songs are some of the best versions of those songs and the originals are great in their own right. "The Last Christmas" always makes my wife and I tear up a little. I like that that there's a few off-the-beaten-path tunes like "River" (originally by Joni Mitchell) and "Christmas Island." This is top quality Christmas music. Heck, I even like "Riu Riu Chiu" and I usually don't like foreign language songs. Steve Hindalong from The Choir helps out on a lot of the tracks and even helped write "The Last Christmas."

Useless Fact: This is the first album the band has put out since Divine Discontent. Hopefully this is a sign of new music on the horizon! Also, the vocalist from Jars of Clay sings on "Silent Night."
Posted by The Old Man at 8:52 AM