Deliverance - "Back in the Day: The First Four Years" 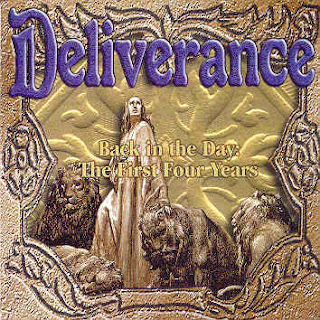 Deliverance - Back in the Day: The First Four Years
2000, M8
1. Narration
2. Who Will Save the Children?
3. Stand Up and Fight
4. Narration
5. No Time
6. Narration
7. Talk from the Stage
8. Fortress
9. Deliverance
10. Narration
11. Attack
12. A Space Called You
13. Narration
14. Hold On Tightly
15. J.I.G.
16. Temporary Insanity
It's no secret that I'm a big Deliverance fan. A big fan. So much so that I almost wet myself when I saw this in a store. I thought I was really going to hear some great early D stuff. Keep in mind it had been forever since a new record came out. Unfortunately the sound quality on these tracks is so bad it's unlistenable. Jimmy narrates the story of the first four years of D which is nice for a big fan, but it's not something you'll ever listen to again. Heck, you might not even finish it - the sound is that bad.
Useless Fact: This disc has been released twice with two different covers. I have the first cover. I think I actually like the second better.
Posted by The Old Man at 9:53 AM