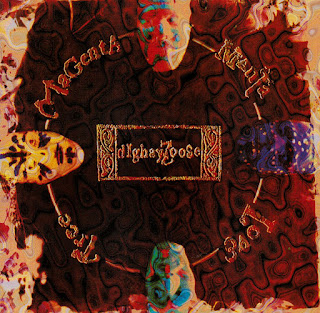 DigHayZoose - MagentaMantaLoveTree
1993, BAI
1. Beginning
2. Dancing In Concert With the Infinite
3. Whoompfinashun #7
4. Slatherage
5. Brave Strong Song
6. Lift
7. MagentaMantaLoveTree
8. No One Told You?
9. Secret
10. Detention 3:00 AM
11. Penalty Box
12. Circle of Pain
13. Doubt
14. Diggin' Away
15. Vanillanator
16. H8 Machine
17. Untitled
18. Black-Eyed Pea
19. 99 Cent Smile
20. B.D.O.C.
21. Regret
22. Twenty-Second Track
DHZ's first album was sort of a Red Hot Chilli Peppers funk/rock record that I never really cared for. This one sees their sound shift into the sort of eclectic "everything but the kitchen sink" sound similar to their friends Hot Pink Turtle. Though DHZ is a lot less spastic than HPT. They don't switch it up as much during songs, but they do have a lot of different types of songs. Some are sort of grunge ("Slatherage"), some are alt rock ("Dancing..."), and some are plain ol' metal ("H8 Machine"). Even with all the different songs the album sounds focused and doesn't feel like you're on a roller coaster getting jerked around between tracks. There's some good emotion here too - take the melancholy "Doubt" for example. The vocalist is pretty good too. This is another CD of mine that is "Christmas music" despite having nothing to do with Christmas. If you haven't guessed by now... yes... I'm weird.
Useless Fact: Terry Taylor from Daniel Amos does a teeny, tiny guest spot on "Secret."
Posted by The Old Man at 8:10 AM