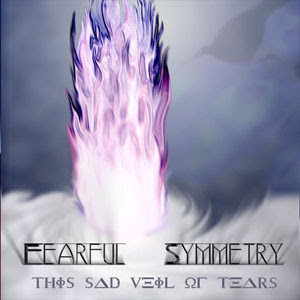 Fearful Symmetry is a side project of Jimmy Brown from Deliverance. Instead of metal, however, this is a mix of rock, industrial, and electronica. "Lead Us" reminds me a little of Nine Inch Nails "Closer" but only because of the puffing/hissing backbeat. "Sighs" though seems like it could have been a track on Deliverance's Assimilation. I gave this CD glowing reviews the first time I wrote about it but I confess that I don't listen to this one nearly as much. I like it but I think I have to be in the right mood for it.

Useless Fact: This was originally supposed to be the new Deliverance album after Assimilation. However, I spoke with Jimmy personally and advised him that maybe he should release this under the Fearful Symmetry so as not to alienate D fans. Okay... I didn't personally talk to Jimmy Brown, I just mentioned in my pre-release review (for the old D website) that he might want to release this under the Fearful Symmetry name. It wasn't long after that that he did change it. So... I'm totally taking credit for it and you can't stop me!
Posted by The Old Man at 9:54 AM