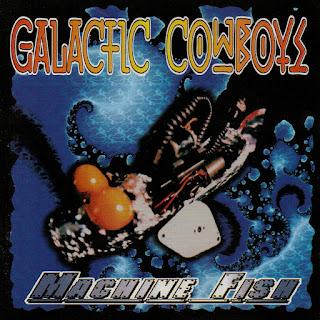 Galactic Cowboys - Machine Fish
1996, Metal Blade
1. Feel the Rage
2. Struggle
3. Fear Not
4. Stress
5. Psychotic Companion
6. In This Life
7. Easy to Love
8. Red Sun
9. Idle Minds
10. The Lens
11. Pattin' Yourself On the Back
12. In a Lonely Room
13. 9th of June
14. Arrows
Machine Fish heralds a host of new changes for the band. New record label, new producer, new guitarist Wally Farkas (replacing Dane Sonnier). Their sound changes a little as well. There's not as much an emphasis on harmonies and progressive song writing. The focus here is on riffs and writing tighter songs, I think. There are songs like "Pattin' Yourself on the Back" and "Feel the Rage" that are probably some of the heaviest songs they've done. Unfortunately, I don't really like this one as much as the first two. I can't quite put my finger on why I don't dig this as much but I tend to shy away from it when I want my Cowboys fix. In fact, I have to say this is the last Cowboys record I really liked. After this they got farther and farther away from the metal aspect of their sounds and the riffs I liked so much in favor of a more alternative sound I think. Love "Arrows" though... it's a nice morose piano song.
Useless Fact: I found out about this album because Metal Blade somehow got my address and sent me a little card with an add for it.
Posted by The Old Man at 10:10 AM