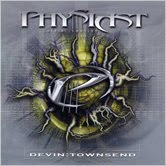 Devin Townsend - Physicist
2000, Inside Out

I've heard that this was Devin's attempt to make a pop-metal record. I'm not quite sure it works as that. It's too dang heavy to be pop that's for dang sure! This one took some time to grow on me. I really liked the more melodic songs like "Kingdom" and "Jupiter" but some of the other tracks are just... pounding. Like... nonstop, continuous pounding. It's grown on me some but not as much as some of the later stuff.

Useless Fact: I think this originally started out as a project between Devin and Jason Newstead from Metallica. It's too bad that original idea never materialized because I think that would've been cool.