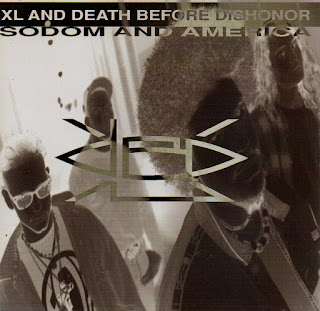 XL and Death Before Dishonor - Sodom and America
1993, Word
1. Brother to the Saboteur
2. Sodom and America
3. Kiss of Chaos
4. Death Before Dishonor
5. Don't Fool Yourself
6. My So Called Friend Death
7. Die (That Settles It!)
8. Woman
9. Fatal Blow
10. Sifting With the Sickle
11. Brink of Insanity
12. Afrocka
Long before Korn and Limp Biscrap... in the days before Crazy Town and Linkin Park, XL was doing rap and metal. I think he did it pretty well. Though this disc is a bit more thrash than it is a rap fusion. There are a lot of guests as well. Jimmy Brown from Deliverance and Super C from S.F.C. to name a few.

A young man named Joshua recently commented on my other blog about XL. He said, "I saw your review of XL & DBD, but the website wouldn’t let me comment on it. Anyay, XL (Todd Stevens) is a friend of mine. “Live from Ninevah” despite it’s title is a studio album and it’s more mainstream hard rock with no rap vocals. It reminds me a lot of Alice In Chains. XL also put out a totally rap CD, no rock at all. I also have a handful of independent CD’s and demos that he gave me. One is even his praise and worship band “Psalt”." Cool info!

Useless Fact: I guess these guys did another album called Live at Ninevah or something but I never saw hide nor hair of it.
Posted by The Old Man at 9:38 AM

Labels: XL and Death Before Dishonor