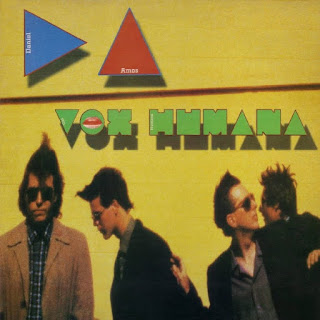 Daniel Amos - Vox Humana
1984, Refuge
1. Travelog
2. (It's the 80's, So Where's Our) Rocket Packs
3. Home Permanent
4. It's Sick
5. William Blake
6. Dance Stop
7. Live and Let Live
8. When World Collide
9. As the World Turns
10. She's All Heart
11. The Incredible Shrinking Man
12. Sanctuary
Okay, now if someone said this was New Wave I'd completely agree. It's full of upbeat synth laden tracks that sound distinctly 80's. While I think Alarma! and Doppelganger are pretty timeless, Vox Humana sounds like the best 80's record you've never heard. I especially like "(It's the 80's, So Where's Our) Rocket Packs" which reminds me a lot of The Buggles' "Video Killed the Radio Star" but mainly in the way the vocals are processed. I also love "William Blake" which sounds like a song David Bowie would have done, but I can't really compare it to a specific song. That's the thing about Daniel Amos - they almost hover on the verge of familiarity yet everything they offer is always fresh and new. Oh, and "Sanctuary" is a beautiful, touching song about God being our true refuge in trouble.
Useless Fact: Leo Sorentino, the road manager for The Choir, appeared on the cover in the place of keyboardist Rob Watson despite looking nothing like him. I don't know if that's actually true but I needed a fact for this record and wikipedia happily obliged.
Posted by The Old Man at 8:30 AM