Galactic Cowboys - "Space in Your Face" 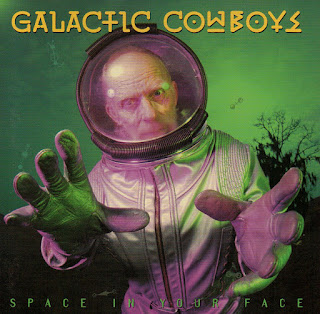 Well lookee here, the Cowboys can actually write songs less than six minutes long! Space In Your Face is every bit as good as the debut. "Circles in the Fields" is a song about crop circles and "If I Were A Killer" is a pretty caustic anti-abortion song. I think the voice over in "Where Are You Now?" is funny.

Useless Fact: "Ranch On Mars" and "Still Life of Peace" were only available on the CD version of this album as unlisted tracks. "Ranch On Mars" is buried between tracks and "Still Life of Peace" was track 32 on the CD. The record company only wanted 9 songs... idiots! After this release I think the band crammed as many songs on their albums as they could out of spite.
Posted by The Old Man at 10:00 AM