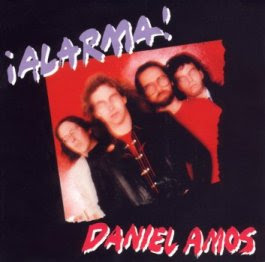 I first heard of Daniel Amos back when Motorcycle came out so I've only a vague familiarity with the fabled Alarma Chronicles when I first started liking the band. I then heard the quirky "Faces to the Window" on some M8 sampler years later. Finally, I was able to hear this first part to the Chronicles entirely. I love it. The whole album is full of quirky little songs like "Faces to the Window." I guess people call it New Wave but it doesn't sound like any New Wave I've ever heard. I think it's a good sign for a band when you can't say exactly who or what they sound like but you can hear who they've influenced. I immediately thought of Deliverance's later works during the chorus of "Central Theme." This album has finally been rereleased by Born Twice records as a two disc special edition. That's the one I have and it's dreamy. Definitely worth picking up if you don't have it.

Useless Fact: Jupiter VI covered "Through the Speakers." I love both versions - that's how good a song that is.
Posted by The Old Man at 7:56 AM